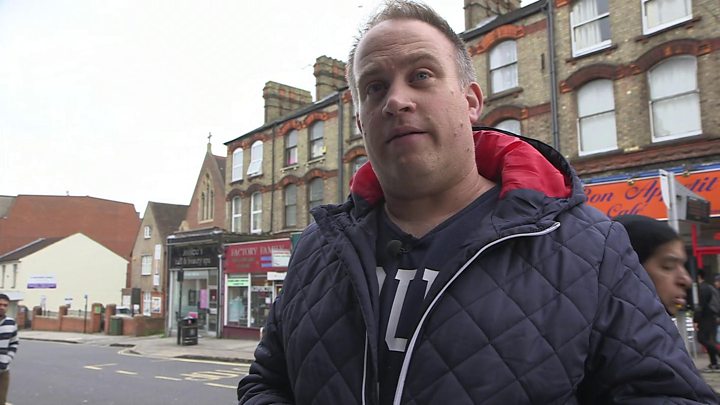 Fixed-odds maximum bet 'could drop to £2'

The maximum stake for fixed-odds betting terminals could drop to as little as £2 under a government review.

Currently, people can bet up to £100 every 20 seconds on electronic casino games, but ministers are considering a new limit somewhere between £2 and £50.

The consultation aims to reduce the risk of people suffering large losses and to tighten up advertising rules.

The Association of British Bookmakers said problem gamblers would find somewhere else to continue their habit.

Changes would hit UK gambling company revenue, put at £1.8bn last year, but problem gamblers say action must be taken – including, but not only, lessening the amount they can lose in one hit.

Former addict Jason Haddigan told the Victoria Derbyshire programme how he lost £300,000 on FOBTs and was eventually banned from all UK bookmakers in 2014.

"I was conning the bookmakers to fuel my addiction. That's why a crown court judge banned me for five years," he said.

He described how he had gambled "since the age of nine" and used to bet on racing. But bookmakers set a limit on what he could put on a horse and suggested he used the fixed-odds machine to gamble instead.

As part of the government review:

"It is vital that we strike the right balance between socially responsible growth and protecting the most vulnerable, including children, from gambling-related harm," she said.

"We have seen online gambling grow rapidly and we need to protect players in this space, while also making sure those experiencing harm relating to gambling receive the help they need," she said.

But in an urgent question session in the Commons, shadow culture secretary Tom Watson said the government was kicking the issue into "the long grass" and added that action, rather than a consultation, was needed.

"There's an old maxim that the bookies always win, and they've won again today," he said.

Mr Watson, who is also Labour's deputy leader, claimed that 450,000 children are gambling on a weekly basis.

Labour wants a new gambling bill to look at the explosion of digital and online products – to stop children gambling on phones and to protect vulnerable people.

Carolyn Harris MP, who chairs an all-party parliamentary group on the issues involved, said there was overwhelming evidence people's lives were being destroyed by the machines.

"When you see the statistics that 31% per cent of people who use these machines are earning less than £10,000… Where do they get the money? Because they are not earning it," she told the Victoria Derbyshire programme.

The government began to look again at gambling in October 2016, when it made a "call for evidence" on the number and location of gaming machines and the measures in place to protect players.

Fixed-odds terminals were introduced in casinos and betting shops from 1999, and offer computerised games including roulette and blackjack at the touch of a button.

Each machine accepts bets up to a pre-set maximum and pays out according to fixed odds on the simulated outcomes of games.

Two categories of games are available, including B3 games with a maximum stake of £2 and a top prize of £500 and the more contentious B2 games, which allow for bets of up to £100 every 20 seconds.

'Reducing FOBT odds is a matter of principle', by Amol Rajan, media editor

Like every other industry, gambling has been radically transformed by technology. The advent of smartphones has made gambling much easier, more convenient, and constantly present than it was before. For centuries, gambling was for the most part an activity or habit that you had to move towards. Now, thanks to the internet, the gambling comes to you.

It is dangerous to reduce the debate of FOBTs to one about economics: how much is raised in tax revenue; potential job losses; the impact on our high streets and so on. It is rather also a question of principle.

In a free or liberal society, is it reasonable to let fully informed adults of sound mind make their own decisions about how to spend – and yes, waste – their money? Perhaps it is; but it becomes intolerable when this freedom harms others.

It seems that public opinion has moved to the view that negative social consequences and harm have flowed from the gambling industry's tendency to cluster in areas of deprivation and high unemployment.

Malcolm George, of the Association of British Bookmakers, said the government shared its wish to identify problem gamblers and get them help.

But restricting terminals in betting shops would redirect problem gamblers to other avenues where there were fewer controls on the amount of gambling, he said.

"Just as alcohol policy in this country is not solely determined by alcoholics" he added, there needs to be an environment for the "vast majority who gamble responsibly".

The British Amusement Catering Trade Association's John White said the government needed to "strike the right balance", but stakes should be "quite substantially" reduced, he said.

Asked about job loss fears, he said half of high street adult gaming centres had disappearing since FOBTs were introduced.

Tax law changes in 2001 led to a vast increase in the number of terminals.