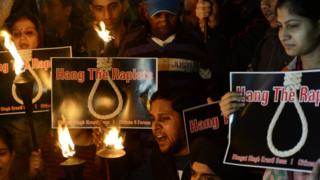 A fast-track court in India has convicted two men of raping a 10-year-old girl who gave birth to a baby girl in August.

Both the men were the child's uncles. The sentencing is set for Thursday.

Her pregnancy was discovered in mid-July when she complained of a stomach ache and her parents took her to hospital.

The second uncle was arrested after the baby's DNA sample did not match that of his older brother, the first suspect.

The final arguments were completed by the defence on Monday. On Tuesday, the two men were declared guilty in court.

The older uncle's trial took a month, while the younger uncle has been convicted in a remarkable 18-day trial, BBC Punjabi's Arvind Chhabra reports from Chandigarh.

The harrowing case of the 10-year-old has made headlines for weeks, both in India and globally.

She was 30 weeks pregnant when a local court in Chandigarh turned down her abortion plea on the grounds that her pregnancy was too advanced. A doctors' panel had advised that a medical termination would be "too risky". Later, the Supreme Court also refused to allow an abortion for her on similar grounds.

Indian law does not allow terminations after 20 weeks unless doctors certify that the mother's life is in danger.

The girl was not aware of her pregnancy, and was told her bulge was because she had a stone in her stomach, says the BBC's Geeta Pandey in Delhi. She gave birth in August and the baby was given away to child welfare authorities for adoption.

The girl initially told police and child welfare activists that she had been raped several times in the past seven months by the first uncle, who is in his 40s.

She had also testified to the court by video link and very clearly named the uncle and revealed details about her abuse.

The girl's father had told the BBC that the first uncle had not denied the charges against him. Police also said he had admitted to the allegations.

But after his DNA test results did not link him to the baby, police began searching for more suspects – and arrested the second uncle in September. A DNA test confirmed that he was the baby's father.

The country's courts have received several petitions in recent months, many from child rape survivors, seeking permission to abort.

In most cases, these pregnancies are discovered late because the children themselves are not aware of their condition.

In September, a 13-year-old girl was given court permission to terminate her pregnancy at 32 weeks. The boy she was carrying was born alive in Mumbai but died two days later.

In May, a similar case was reported from the northern state of Haryana where a 10-year-old, allegedly raped by her stepfather, was allowed to abort. She was about 20 weeks pregnant, doctors said.

None of the girls can be named for legal reasons.

The scale of abuse in India