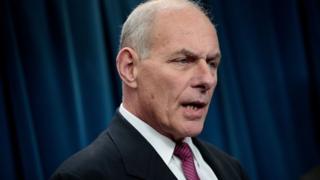 John Kelly: US Civil War caused by 'lack of compromise'

Confederate symbols have been a source of controversy in the US. Some see them as an offensive reminder of America's history of slavery while others view their removal as an effort to subvert US history and southern culture.

His remarks prompted a furious discussion on social media. The phrase "Civil War" was trending in the US – used more than 30,000 times on Twitter since Mr Kelly made his remarks on Monday night.

Chelsea Clinton and Bernice King, daughter of civil rights leader Martin Luther King, were among those to voice their opposition.

Gen Kelly also described Confederate general Robert E Lee as "an honourable man" who "gave up his country to fight for his state".

"There are certain things in history that were good, and other things that were not so good," he said.

"I think we make a mistake as a society, and certainly as individuals, when we take what is accepted as right and wrong, and go back 100, 200, 300 years or more and say, 'What Christopher Columbus did was wrong,'

"The lack of an ability to compromise led to the Civil War. And men and women of good faith on both sides made their stand where their conscience has to make their stand."

The secession of southern states in 1860-61, and ensuing armed conflict until 1865, came after decades of growing animosity over the issue of slavery, and the election of Abraham Lincoln, who was explicit in his opposition to slavery, as President in 1860.

Speaking to the BBC in May, three prominent historians of the American Civil War said there was a consensus that slavery was the key reason for the civil war.

Jim Grossman, from the American Historical Association, told the BBC: "When people say it was about state's rights, in 1861 states had nothing else to defend but slavery.

"They seceded because they thought the election of Lincoln threatened the institution of slavery,

"There are people who are not happy with that answer, who would like to see the Civil War as having been about something else."

On social media, many pointed to earlier attempts to avoid conflict.

Critics drew parallels between Gen Kelly's remarks and those made by President Trump in the wake of violence at a far right rally in Charlottesville in August.

One woman was killed and several more injured when a white supremacist drove his car into a crowd of counter-protesters.

President Trump sparked controversy at the time by blaming violence "on both sides" for the attack.

Gen Kelly's comments come as President Trump is facing renewed scrutiny over possible links between his campaign team and Russia.

Election campaign advisor George Papadopoulos has pleaded guilty to lying to the FBI about the timing of meetings with alleged go-betweens for Russia.

President Trump's former campaign manager Paul Manafort, and his associate Rick Gates, have been placed under house arrest after denying 12 charges, including conspiracy to launder money and conspiracy against the United States.

Should Washington and Jefferson monuments come down?

IcetruckOctober 31, 2017
Like story:
tweet
You can stymie the iPhone X Face ID – but it takes some work
Eurozone growth exceeds expectations