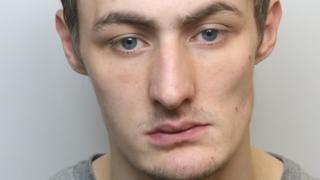 The family of a young mother have petitioned Facebook to have "all ties to her murderer" removed from the site.

Dylan Harries was jailed for life last month for the "merciless" killing of Katrina Evemy in Llanelli, Carmarthenshire.

Amanda Dewsnap said it made her angry to see her daughter in his "loving couple" profile picture and his status saying they were still in a relationship.

A spokesman from the social media site said they understood the "upsetting nature of the issue" and are looking into it "as a matter of urgency".

Harries stabbed Miss Evemy, 19, in front of her 22-month-old daughter at their home in Graig Avenue on 13 April.

He denied murder but was found guilty by a jury at Swansea Crown Court and was jailed for a minimum of 27 years.

Mrs Dewsnap said Harries' profile picture of the pair pops up whenever she goes on Facebook.

"It's devastating enough that she has been murdered by him but his picture shows he still has a hold on her," she said.

She said the family had contacted Facebook requesting the picture and relationship status be removed, but had received no response to date.

It has prompted a petition which has received almost 6,000 signatures.

It said: "His [Harries'] Facebook profile picture is a constant reminder of the monster still having power over his late victim that he cruelly stole from our lives."

Mrs Dewsnap said his sentence would allow him to "have another life when he got out" but her daughter was gone forever.

"No time would have been enough for him," she said.

"The whole family have been left devastated and we just don't know the effect it's going to have on Katrina's daughter."