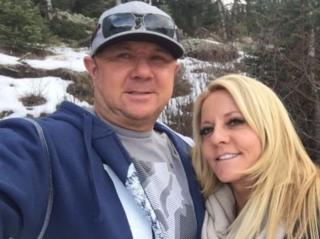 A husband and wife from California who survived this month's massacre at a concert in Las Vegas have died together near their home in a fiery car crash.

Dennis and Lorraine Carver's vehicle careered off the road on 16 October and hit a brick wall, exploding into flames, said California Highway Patrol.

The crash came less than two weeks after they ran from a hail of bullets in America's worst mass shooting.

The couple were dancing at a concert when shots rang out on 1 October.

Mr Carver jumped on top of his wife to shield her from the bullets, the couple's adult daughter said, as a gunman opened fire on the Route 91 Harvest music festival, killing 59 people and wounding nearly 500.

"That's just the kind of love they had for each other," Brooke Carver told the Las Vegas Review-Journal. "Their love was selfless."

After about three or four volleys of gunfire, they stood and ran through a hail of bullets, ultimately escaping unharmed.

The couple seemed to emerge from the shooting even deeper in love, their daughter said.

"The last two weeks of their lives were really just spent living in the moment," said Brooke Carver.

"After the shooting, they heard from all of the people they cared about most. They were so happy."

Three days after the shooting, Mr Carver bought roses for his wife to cheer her up.

"He just wanted to give my mom a reason to smile after the shooting," said Brooke Carver.

"I swear they were more in love those two weeks than the last 20 years."

Mr Carver, 52, and Mrs Carver, 53, are survived by their two daughters.

They had been together for 22 years.