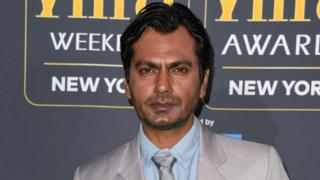 Bollywood actor Nawazuddin Siddiqui has recalled a controversial memoir which was criticised for detailing his relationships with several women without their permission.

An Ordinary Life, released on 16 October, contained vivid details of the actor's relationships, including with one of his co-stars, Niharika Singh.

In a statement Singh said, "none of what he has written has been with my knowledge, let alone my consent".

"I am apologising to everyone whose sentiments are hurt because of the chaos around my memoir, "An Ordinary Life". I hereby regret and decide to withdraw my book," Siddiqui wrote on his Facebook and Twitter pages late on Monday.

He did not personally apologise to any of the women he had named.

The apology came after another woman, mentioned in the book as the actor's first girlfriend, also took to Facebook to accuse him of "extraordinary lies".

Siddiqui, 43, had said she broke off the relationship because he was a "struggler" when they were together.

"I did not leave you because you were poor, but because of your poor way of thinking," she said.

Siddiqui is seen as one of Bollywood's most talented actors, starring in critically acclaimed productions like Gangs of Wasseypur and Lunchbox.