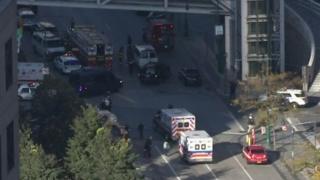 A suspect has been arrested in New York after people were reportedly shot at by the driver of a vehicle.

Police said they made the arrest after responding to "reports of shots fired" near the West Side Highway in Lower Manhattan.

They urged people to avoid the area as a major emergency services operation was under way.

Unconfirmed reports on social media suggest a man drove at cyclists in a cycling lane before opening fire.

One eyewitness told CBS News: "There was a huge accident and someone was screaming gun."

Another witness told ABC Channel 7 that a white truck drove onto the bike path alongside the West Side Highway, hitting several people.

He described bodies laying on the road outside a city school.

New York City's mayor Bill de Blasio is on the way to the scene, his press secretary said.

Due to police activity, avoid the area of Chambers Street/West St.
One person is in custody. Expect many emergency personnel in the area. pic.twitter.com/rSECr0LRCN

Scene of incident in lower Manhattan, where multiple people are injured. pic.twitter.com/oDfunewdNV