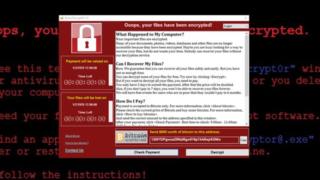 North Korea has hit back at the UK government for accusing it of being behind a massive ransomware attack that badly affected the National Health Service (NHS).

A UK government minister last week told the BBC he was "as sure as possible" North Korea was behind the attack.

But a North Korean spokesman called the accusations "groundless speculation".

More than a third of NHS trusts in England were disrupted by the WannaCry ransomware in May.

At least 19,000 appointments were cancelled and computers in over 600 doctor's surgeries infected.

WannaCry was the biggest cyber-attack to have hit the NHS to date and also spread to more than 150 countries.

A spokesman for the North's Korea-Europe Association called the UK's accusation "a wicked attempt" to tighten international sanctions on the country.

"This is an act beyond the limit of our tolerance and it makes us question the real purpose behind the UK's move," he said in comments carried on the Korean Central News Agency on Monday.

The South Korean government believes the North has a unit of 6,800 trained cyber-warfare specialists.

Pyongyang's cyber military was thought to be behind an online attack on Sony Pictures and a hack last year in which blueprints of a South Korean warship company were stolen.

IcetruckOctober 31, 2017
Like story:
tweet
UN environment chief: US likely to live up to Paris accord
Slow flow of human immigration may have doomed Neanderthals