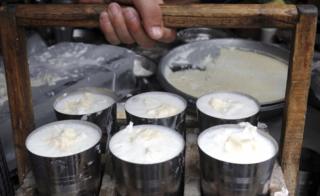 A newlywed woman in Pakistan has been arrested on suspicion of killing her husband and at least 12 of his relatives with poisoned milk.

Police claim Asiya Bibi had intended the deadly substance for her husband, and mixed it with his milk last week – but he failed to drink it.

Instead it was turned into a batch of lassi, a yogurt drink, and served to his extended family.

Police said the woman had been forced into an arranged marriage in September.

Such weddings are not uncommon in poorer and more rural areas of Pakistan, and are often pushed through by family members.

In this case, which took place in central Muzaffargarh, local media say the bride had tried unsuccessfully to flee her marital home and return to her parents.

Senior police official Owais Ahmad confirmed that Asiya Bibi has been charged with murder. A man alleged to be her lover, and his aunt, have also been arrested.

Police said 13 people died and 14 were hospitalised. The Pakistani broadcaster Geo TV put the number of dead at 15, with children among them.

The death toll has been rising since last Thursday, when the tainted drinks were first served and eight people initially died.