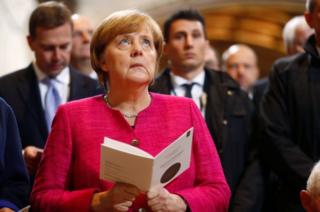 A special religious service is being held in the German town of Wittenberg to mark the 500th anniversary of the Reformation.

On this day in 1517, Martin Luther is said to have nailed 95 theses to the door of All Saints' Church in the town.

The theologian said Christians could not buy or earn their way into heaven but only enter by the grace of God.

His criticism led to a split with the Roman Catholic Church and the birth of Protestantism.

The Reformation caused lasting change in Europe, leading to wars and persecution, but also to greater freedom of religion and expression.

Here are four things to know about Tuesday's events:

Chancellor Angela Merkel and President Frank-Walter Steinmeier are attending several ceremonies in Wittenberg, starting with a service at All Saints' Church (Schlosskirche) – where Luther is said to have first displayed his list of criticisms in 1517.

It marks the end of year-long celebrations by Protestants in hundreds of German towns and cities.

Ahead of the anniversary, Mrs Merkel said the ceremonies provided "the opportunity to reflect on what changes resulted from the Reformation".

The centre of Wittenberg has been transformed to recreate the medieval era in which Luther lived, with performances taking place throughout the day.

Thousands of visitors from around the world have visited the town – about 100km (60 miles) south-west of Berlin – in recent months as it forms the focus of the anniversary celebrations.

Germany is also marking 31 October with a national public holiday.

What was the Reformation?

As the Reformation spread through Europe, it was marked by bloody episodes of warfare and violence.

Wars were waged in central, western and northern Europe from 1524 to 1649, fuelled by the religious rivalry that Luther had unwittingly inspired.

Eventually, the Protestant and Catholic Churches would co-exist peacefully, but without any formal links.

On Tuesday, Catholic and Lutheran leaders issued a joint statement saying they begged forgiveness for the violence waged.

"We begged forgiveness for our failures and for the ways in which Christians have wounded the Body of the Lord and offended each other during the 500 years since the beginning of the Reformation until today," the Vatican and Lutheran World Federation said.

They added that, while the past could not be changed, its influence could be transformed to become a sign of hope for the world to overcome division.

After Luther realised that he would not be able to convert Jews to his version of Christianity, he unleashed a tirade of anti-Semitic writings.

He argued that Jewish synagogues, schools and homes should be set on fire, that Jews should have their assets confiscated and that they should be used as forced labour and expelled.

His texts, such as On the Jews and Their Lies, were used extensively by the Nazis.

Amid ceremonies marking Luther's legacy 500 years on, there have also been protests about an anti-Semitic sculpture (Judensau) which remains on the facade of another church in Wittenberg.

There have been calls to remove the offensive stone image, which shows Jews suckling the teats of a sow as a rabbi looks intently under its leg and tail.