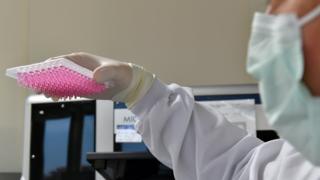 The Kremlin says foreign agents are collecting DNA samples from Russians of different ethnicities and sending the data abroad for scientific analysis.

Mr Putin told a Russian human rights committee that the DNA collection was "systematic and professional".

Some scientists quoted in the Russian media speculated that the data could be used in US biological warfare research.

A Russian MP close to the Kremlin, Gennady Onishchenko, said new "biological security" legislation to control access to Russians' DNA "should be introduced in December" in parliament.

Mr Onishchenko formerly headed a state agency – Rospotrebnadzor – that conducts sanitary checks on imported food and drink. The agency imposed temporary bans on certain produce from Georgia and Moldova, at times of political tension with Russia.

He said foreign labs were analysing Russians' DNA and restrictions on such research were necessary.

"The fact that our citizens' fluids, organs and tissues are being collected is evidence that the US has not stopped its aggressive military programme," he alleged.

Earlier Mr Putin avoided such speculation about the DNA analysis, and simply asked "why are they doing this?"

At the height of the Cold War both the US and Soviet Union researched lethal biological agents that could be weaponised.

He said that, for example, about 1% of Europeans had natural resistance to HIV, the virus that triggers Aids.