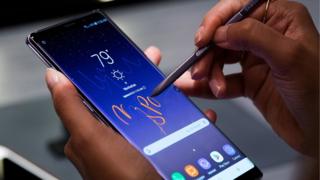 Three executives have been promoted to joint chief executives of the firm as part of the management overhaul.

The shake-up came hours after the firm reported quarterly profits had nearly tripled from a year ago.

The new appointees are all in their 50s and include Kim Ki-nam, Koh Dong-jin and Kim Hyun-suk.

They will take up their positions immediately as the heads of Samsung Electronics' three main businesses – Device Solutions, IT and Mobile Communications and Consumer Electronics.

"The next generation of leaders are well suited to accelerate the pace of innovation and address the demands of the connected world," the firm said in a statement.

The South Korean tech giant also confirmed that its chief financial officer Lee Sang-hoon had been recommended as the new chairman of the board, and that long-time co-CEOs J.K. Shin and Yoon Boo-keun would step down.

It is the first time the chairman role has not been given to one of the firm's three chief executives.

The firm is striving to regain the confidence of the government and financial markets in the aftermath of the corruption scandal in which the Samsung Group's heir apparent Lee Jae-yong was jailed for bribery and corruption.

The leadership shake-up began about a fortnight ago when Mr Kwon became the first of the firm's three chief executives to resign, citing an "unprecedented crisis".

At the time, he said the company's current profitability was "merely a fruit of decisions and investment made in the past".

His resignation came days after Mr Lee began an appeal against his conviction and five year jail sentence, stemming from payments to the secret confidante of South Korea's ousted president Park Geun-Hye.

Samsung Electronics is regarded as the jewel in the crown of the Samsung conglomerate, which is made up of 60 interlinked companies.

The world's biggest memory chip and smartphone maker expects strong demand for its products to continue, putting it on track for a record annual profit.

It will also pay around $26bn in dividends to shareholders over the next three years.

While memory chips were the main driver of Samsung's earnings, its mobile phone business was given a boost by its new Note 8 smartphone which received the firm's highest number of pre-orders.

It marks a significant turnaround for the firm which was hit badly by the global recall of its flagship Note 7 smartphone in 2016, following the fiasco with its overheating and exploding batteries.