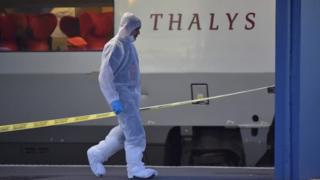 Two people have been charged in Belgium over an August 2015 attack on a French high-speed train travelling from Amsterdam to Paris.

The pair were charged with participating in "the activities of a terrorist group", prosecutors said.

They are suspected of helping Moroccan gunman Ayoub El-Khazzani, who opened fire on the Thalys train but was overpowered by passengers, including three Americans and a Briton.

No one died in the incident.

The suspects charged on Tuesday were named as Mohamed B and Youssef S. They were among four people detained in police raids in Belgium on Monday. The two others were released after questioning.

Prosecutors said no explosives or weapons were found during the raids

Mr El-Khazzani, 26, is awaiting trial in France. He fought for the Islamic State group in Syria and has told investigators that he was acting under the guidance of Paris attacks' organiser Abdelhamid Abaaoud, according to the AFP news agency.

He was armed with a Kalashnikov assault rifle, 270 rounds of ammunition a pistol, a bottle of petrol, a box-cutter and a hammer when he boarded the train, according to French prosecutors, who said he intended to carry out a mass slaughter.

IcetruckOctober 31, 2017
Like story:
tweet
IPhone X screen repairs could cost as much as $279
Based On Their Zodiac, Here Are Boyfriends Ranked From Most Faithful To Most Likely To Cheat