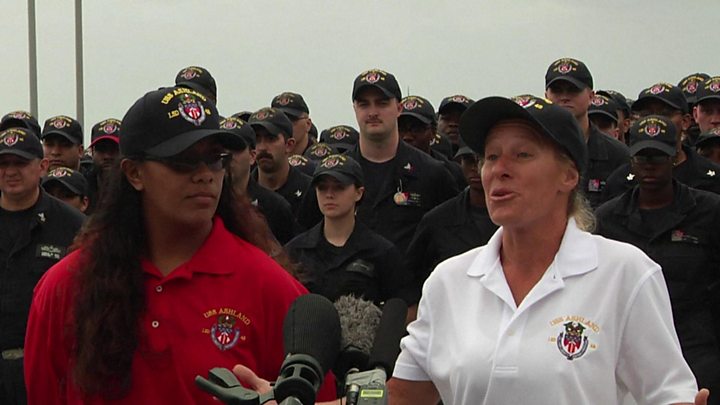 Doubts have emerged about the survival story told by two US women who said their lives had been saved when they were rescued by the navy after spending five months adrift in the Pacific.

The US Coast Guard said that neither Jennifer Appel nor Tasha Fuiava activated an emergency beacon onboard.

There appear to be inconsistencies in other details of their story as well.

The pair said they became adrift in May when their boat's engine failed as they headed to Tahiti from Hawaii.

They said the boat was without power or communications in the open seas about 1,500km (930 miles) south-east of Japan before a fishing vessel alerted US authorities to rescue them last week.

The pair, travelling with two dogs, had strayed significantly from their planned course.

Ms Appel later said that she and Ms Fuiava were "incredibly lucky" to survive because they were running out of food and had endured a tiger shark attack.

Why are there doubts?

US Coast Guard spokesman Lt Scott Carr said that interviews with the two women – coupled with a Coast Guard review of the incident – revealed that the pair had an Emergency Position Indicating Radio Beacon (EPIRB) aboard, but did not turn it on.

Such devices emit a distress signal to help rescuers find vessels in an emergency.

It is unclear why the women did not do this if they were in distress, and there is no suggestion they did not know how to work the EPIRB – or that it was faulty.

The women later said that they chose not to activate the EPIRB because they never feared their lives were in imminent danger.

Moreover, Lt Carr told the Associated Press (AP) news agency that when the Coast Guard made contact with the Sea Nymph – the name of the women's boat – in June near Tahiti, the captain said that they were not in distress and expected to return to land soon.

He said that contact was made after the pair claimed they had lost use of their engines and sustained damage to their rigging and mast because of a storm.

It is also not clear if the women tested their radio equipment before they embarked on their voyage – last week they said they had six forms of communication on board but all went dead.

Retired Coast Guard officer Phillip Johnson told AP that the emergency beacons rarely fail and are designed to be suddenly dropped in the ocean.

What other parts of the women's story have been questioned?

The pair said the tropical storm they encountered took place on their first night at sea in early May, and lasted for three days.

But National Weather Service records reportedly show there were no such storms in the region during that time.

There have also been questions as to why the two dogs travelling with the women were in such good health if they were really engaged in a struggle to survive.

In addition critics have asked why the women did not use distress flares or stop at various islands on their route – including Maui, Lanai and Christmas Island – to get help. The Coast Guard is continuing to review the case.

What do the women say?

On arrival in Japan, Ms Appel said that they owed their lives to the US Navy.

In a statement released last week they said that their engine broke at the end of May. They originally thought they would be able to reach land by relying on wind and their sails.

But two months into their journey – and long past their estimated arrival time in Tahiti – they began to issue distress calls, the statement said.

They said they managed to survive the ordeal thanks to a water purifier and more than a year's worth of dry goods such as oatmeal and pasta.

On 24 October, a Taiwanese fishing vessel spotted the 50ft (15m) Sea Nymph bobbing in the ocean and contacted authorities on the US territory of Guam.

The USS Ashland, which was in the area, arrived early the following day to rescue the sailors – both from Honolulu, Hawaii – and their canine companions Valentine and Zeus.