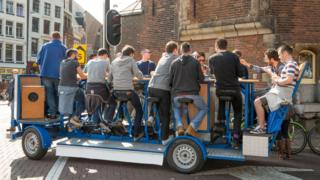 Amsterdam will enforce a ban on beer bikes amid complaints about rowdy tourists being drunk and disorderly.

As from Wednesday "the beer bicycle may be banned from the city centre to stop it from being a nuisance," the Amsterdam District Court said.

The bicycles are a popular way for tourists celebrating group events, such as stag parties, to travel around the Dutch city.

Critics say they have become an example of the problems caused by mass tourism.

The beer bikes are small carts that have been modified with bicycle seats arranged around a bar table.

Patrons power the bike as they pedal beside the city's famous canals, while drinking beer.

Last year, about 6,000 locals signed a petition calling on the council to ban the bikes, calling them a "terrible phenomenon".

At the time, one resident told NOS news: "Our city has become a giant attraction park."

You normally hear them before you see them.

For some tourists these cumbersome contraptions offer the perfect way to see the city. Combining two of its attractions – alcohol and cycling.

They're especially popular with stag dos. Drunken men spilling beer while trying to navigate the narrow streets on wheels have become a familiar sight in the historic heart of the city.

For many residents they've become a symbol of the trouble associated with 'the wrong type of tourism'. The council recently announced plans to increase hotel taxes to try to reduce the number of budget travellers.

The Dutch are famous for their cycling culture but few will miss the inebriated foreigners who commandeer these novelty vehicles, sometimes at the expense of those who use bikes as a practical and sensible way to get on with life.

Amsterdam's late mayor, Eberhard van der Laan – who died last month – agreed with the residents and instituted a ban on the bikes.

This was challenged in court last year by four beer bike operators, who said that the city was "imposing on people's freedom".

Judges struck down the mayor's ban at the time, saying that it was not properly motivated.

In a ruling on Tuesday, however, the judges at the Amsterdam District Court agreed with the ban.

"The combination of traffic disruptions, anti-social behaviour and the busy city centre justifies a ban," they said.

Have you taken a ride on a beer bike? Or do you live in Amsterdam? E-mail us at [email protected]with your experiences.