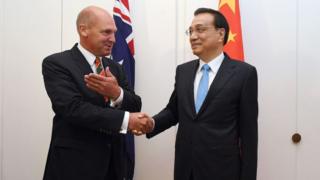 Australian Senate President Stephen Parry has said he will resign, after confirming he is a UK dual citizen.

In a statement, Mr Parry said the High Court of Australia had given "absolute clarity" on constitutional rules that prevent the election of dual citizens.

Mr Parry first raised questions about his citizenship on Tuesday.

The senior government figure said he had decided to resign with "a heavy heart" after the British Home Office confirmed he was a citizen by descent through his father.

The role of Senate president is to preside over Australia's upper house. Mr Parry's successor is expected to be another government senator.

A replacement for his Senate seat will be chosen through a recount of election votes.

Two other senators, Matt Canavan and Nick Xenophon, faced scrutiny over their citizenship, but the court ruled they were validly elected.

Mr Joyce hopes to regain his seat in a by-election on 2 December.