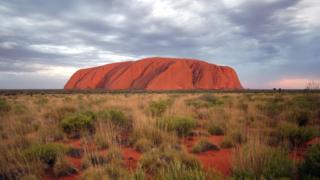 Australia to ban climbing on Uluru from 2019

Climbing on Australia's iconic Uluru landmark will be banned from October 2019, local authorities have confirmed.

The board of the Uluru-Kata Tjuta National Park voted unanimously to end the climb because of indigenous sensitivities.

The giant red monolith in the Northern Territory is a sacred site for Aboriginal Australians.

Local people have long asked visitors not to climb the outcrop, which was known for many years as Ayers Rock.

Signs at the start of the climb ask people to abstain from going up in respect to the traditional law of the Anangu Aboriginal people, the custodians of the land.

"It is an extremely important place, not a playground or theme park like Disneyland," board chairman and Anangu man Sammy Wilson said on Wednesday.

"If I travel to another country and there is a sacred site, an area of restricted access, I don't enter or climb it, I respect it. "

He said the Anangu people had felt intimidation over the years to keep the climb open because it was a top tourist attraction.

However the group had consistently wanted to close the site, a sacred men's area, because of its cultural significance.

"Closing the climb is not something to feel upset about but a cause for celebration. Let's come together; let's close it together," he said.

The board was made up of eight traditional owners as well as four government officials.

The Unesco World Heritage-listed monolith was handed back to its traditional owners in 1985. The ban will commence on 26 October, 2019 – the 34th anniversary of the handover.

Tourism Central Australia said it supported the decision, pointing out that the public could still access much of the site respectfully.

However, not all have supported the idea of a ban.

"We should explore the idea of creating a climb with stringent safety conditions and rules enforcing spiritual respect," said Mr Giles, who is Aboriginal.

However weather and safety concerns have also led to the climb being frequently closed over the past 12 months. Since the 1950s, at least 35 people have died on the trek.

This recent push for the climb's ban was outlined in the park's 2010-2020 management plan, where it was proposed the climb be closed if attendance numbers dropped under 20% and other visitor activities were successfully established.

More than 250,000 people visit Uluru each year, according to the national park's website.

IcetruckNovember 1, 2017
Like story:
tweet
Daughter of Apple engineer says he was fired after she posted video of iPhone X
Springer Nature blocks access to articles in China