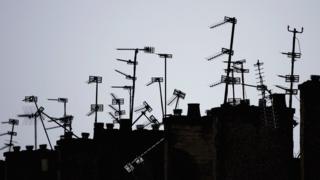 Freeview has said that high air pressure is the cause of disruption being experienced by some of its users in England and Wales.

The service provides access to digital TV channels through aerials, making it possible to watch programmes without a satellite or cable subscription.

The Downdetector website indicates the issue began on Tuesday evening.

Some viewers have complained they missed The Great British Bake Off final as a consequence.

BBC News – The Great British Bake Off 2017: How the final unfolded https://t.co/jjqgyJTsfs Did not see it. Freeview was down…

Freeview said it was unable to remedy the problem until weather conditions changed.

"We recommend that you do not retune your equipment, as reception will return to normal once the weather changes," the platform posted on its website.

"TV and radio signals can be affected by atmospheric conditions, including high air pressure (which brings fine weather), heavy rain or snow."

A spokesman for the service told the BBC that the situation was "uncommon but unpredictable".

"It's impossible for us to say [how many people have been affected] but it's clear the disruption has been widespread across England and Wales," he added.

"The good news is that during the course of the day the issue has lessened as the weather front moves through."

Weather forecasts suggest the problem will continue for some into the evening, but a weak weather front is set to move in from the north on Thursday morning that should be more favourable for transmissions.