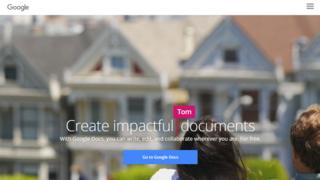 Numerous Google Docs users have reported being mysteriously locked out of certain files in their accounts.

The error had caused files to be flagged as violating Google's terms of service.

Users had received a message saying: "This item has been flagged as inappropriate and can no longer be shared."

Google told the BBC that a code update had caused the error, but that the problem had now been resolved.

Users had taken to Twitter to complain about the issue, saying that while they were working on documents the screen suddenly froze, and then a message came up telling them they could no longer access a file.

Some people have also reported that another error prevented them from sending Google appeal requests to unlock their files.

Other strange behaviour has been noticed on the service – one user, Iain Mackenzie, said the words "game is over" had flashed up in a Google Docs document he had been editing and then disappeared.

Mr Mackenzie said that no other user had been in the file at the time, and that the Google Docs revisions log showed only he had been editing the document for the past few hours.

"This morning, we made a code push that incorrectly flagged a small percentage of Google Docs as abusive, which caused those documents to be automatically blocked," a Google spokeswoman told the BBC.

"A fix is in place and all users should have full access to their docs. Protecting users from viruses, malware, and other abusive content is central to user safety.

"We apologise for the disruption and will put processes in place to prevent this from happening again."