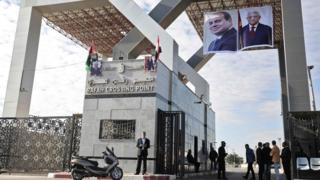 The Islamist group Hamas has begun handing control of border crossings in Gaza to the Palestinian Authority (PA) as part of a reconciliation deal.

A ceremony at the Rafah crossing with Egypt saw a formal transfer from a Hamas official to his PA counterpart.

At the Erez and Kerem Shalom crossings with Israel, Hamas offices and security equipment were being dismantled.

Next month, the internationally-recognised PA is due to take full control of security in Gaza.

The reconciliation deal, brokered by Egypt last month, aims to end a decade-long split between Hamas and its secular rival, Fatah, which dominates the PA.

Palestinians in Gaza and the West Bank have been ruled separately since deadly clashes between Hamas and Fatah broke out in 2007.

In what was seen as the first key test of the reconciliation agreement, the director of the Palestinian Borders and Crossings Authority, Nazmi Muhanna, took full control of the Rafah crossing on Wednesday.

In a short speech, PA Public Works Minister Mufeed al-Hasayneh declared that "the word 'split' will not exist in the Palestinian dictionary anymore".

"There is no yellow and green. All our Palestinian people are under the Palestinian flag," he said, referring to the main colours of the Fatah and Hamas flags.

Civil Affairs Minister Hussein Sheikh said the Rafah crossing would resume full operations on 15 November, when PA border officials and members of the Presidential Guard would be in place.

Rafah has largely been closed since 2007, when Israel and Egypt tightened their blockades of Gaza in response to the Hamas takeover and in an attempt to prevent attacks by militants.

There were no ceremonies at the Erez and Kerem Shalom crossings on Wednesday. But PA officials were seen moving in as Hamas security officials packed up equipment and departed in vehicles.

All the Palestinian factions are due to meet in Cairo on 21 November to continue discussing implementation of the reconciliation deal, including the formation of a unity government that is not expected to include Hamas members.

The issue of the tens of thousands of civil servants employed by Hamas in Gaza will be resolved by February 2018, but the role of Hamas's 25,000-strong military wing was not mentioned in the agreement.

Israel and the US have expressed reservations about the reconciliation deal.

The US said any Palestinian unity government would need to recognise the State of Israel, disarm "terrorists", and commit to peaceful negotiations. If Hamas was to play any role, it added, it would have to accept those requirements.

Israel – which like the US considers Hamas a terrorist organisation and has fought three wars with militants in Gaza – said it would not deal with a Palestinian government that "relies on Hamas".