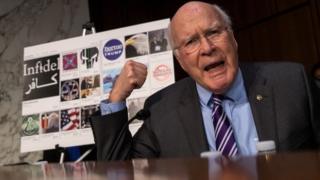 US senators have put on show several examples of what they believe to be Russia's attempt to influence US citizens via social media.

Facebook, Twitter and Google had previously shared with congressional investigators some examples of what they suspected to be adverts and messages posted by Russia-based "troll" operatives, but the material had not previously been made public – although some instances had already been identified by the press.