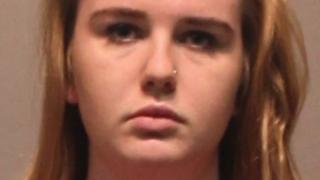 A white US university student is facing a hate crime charge after admitting to smearing bodily fluids on her black roommate's possessions, in an apparent attempt to force her out of the room.

Brianna Brochu, 18, has already been charged with misdemeanour criminal mischief and breach of peace.

Police in West Hartford, Connecticut, said they had asked a judge to add a felony bigotry charge.

Her campaign against roommate Chennel Rowe apparently came to light via Instagram posts in which she bragged about her actions.

In one post, published by local media and described by Ms Rowe in a Facebook video, she reportedly wrote: "Finally did it yo girl got rid of her roommate!! After 1 ½ month of spitting in her coconut oil, putting moldy clam dip in her lotions… putting her toothbrush places where the sun doesn't shine, and so much more I can finally say goodbye Jamaican Barbie."

In a statement addressed to students, Mr Woodward said Ms Brochu's actions were "reprehensible" and the incident "deeply disturbing".

"As of this morning, Brianna Brochu is no longer a student at the University of Hartford. She will not be returning to the institution," he said.

Ms Brochu appeared at Hartford Community Court on Wednesday morning but did not comment during the brief appearance.

In the Facebook video, Ms Rowe said she had felt "unwanted" and "disrespected" by Ms Brochu after moving into the room.

She described becoming sick and said she had suffered "extreme throat pain", which she alleged was connected to Ms Brochu's actions.

"I keep looking at this paragraph, right, because the paragraph said so much stuff she'd done, at the same time she said she's done so much more.

"But I don't know the so much more. I've been using my toothbrush for how long? She says she put my toothbrush places the sun doesn't shine."