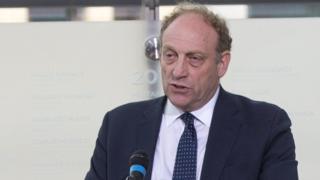 Women working in US media have said a senior editor kissed them without their consent during business meetings.

Michael Oreskes, 63, has been placed on indefinite leave by the National Public Radio (NPR) network in response.

The incidents allegedly occurred in the late 1990s, when Mr Oreskes worked at the New York Times.

Two women spoke to the Washington Post on condition of anonymity, saying they were worried about career development if their names were made public.

They reported similar stories, of abrupt and unexpected kisses during business meetings.

She told the paper: "The worst part of my whole encounter with Oreskes wasn't the weird offers of room service lunch or the tongue kiss but the fact that he utterly destroyed my ambition."

The second woman said she met Mr Oreskes after he offered to help review her work.

She drove him to the airport as he had a flight to catch after their meeting, but he unexpectedly kissed her while saying goodbye.

"I was frozen. I was shocked. I thought, 'What just happened?'" she recalled.

Later, she said, when she confronted him directly about the incident, he told her he was "overcome with passion".

The Washington Post said it had made "multiple requests for comment" to Mr Oreskes, but none had been answered.

Meanwhile, a third woman, a current NPR employee, has detailed a formal complaint she filed against Mr Oreskes with the network back in 2015 after a business advice session she had with him turned into a long evening dinner.

She said he divulged many personal details and veered into topics including relationships and sex. He did not touch her inappropriately, she said, and she was satisfied by the response when she reported the incident to NPR.

Mr Oreskes, who had senior editorial roles at the New York Times and Associated Press, was hired as senior vice president for news at NPR in 2015.

There have been growing sexual harassment allegations against public figures in recent weeks, sparked by multiple women's allegations of behaviour from sexual harassment to rape by Hollywood mogul Harvey Weinstein, and a subsequent campaign encouraging victims to share their stories under the #metoo hashtag.