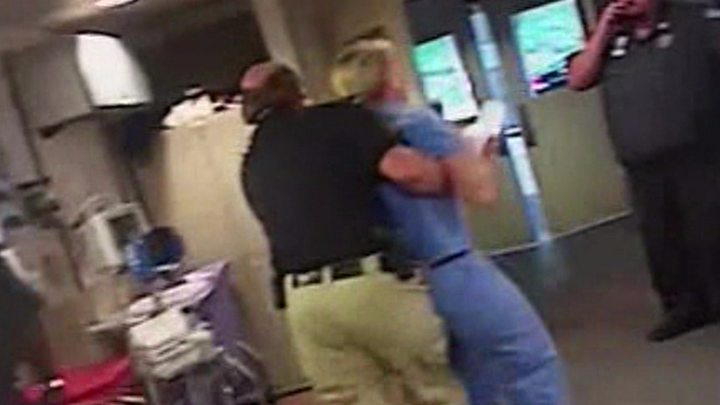 A US nurse who was held for refusing to allow police take a blood sample from an unconscious patient has accepted $500,000 (£376,500) in compensation.

Alex Wubbels reached the monetary settlement with Salt Lake City and the University of Utah, her attorney said.

Her arrest by police in July caused outrage when footage of the incident later emerged. She was seen handcuffed and dragged by a policeman to a car.

She was later released without charge. The policeman was sacked last month.

His superior was demoted.

The police officer, Detective Jeff Payne, was sent to University of Utah Hospital on 26 July to collect blood from an unconscious lorry driver injured in a head-on collision with a suspect fleeing police in another vehicle.

The patient was not suspected of wrongdoing.

Ms Wubbels, who was duty nurse that day, told Detective Payne that he did not present a warrant to collect the blood sample, as required by state and federal law.

She also said blood could not be taken without consent from the patient.

Ms Wubbels declined to tell the officer where the patient was or let him draw blood.

She even called her supervisor to get her to explain to the detective that the nurse was only following hospital policy.

Lt James Tracy, a watch commander, then instructed Det Payne to arrest Ms Wubbels and he proceeded to shove the screaming nurse out of the emergency room before holding her against a wall to handcuff her.

Ms Wubbels told reporters at a news conference in September: "The only job I have as a nurse is to keep my patients safe.

"Blood is your blood. That's your property."

The University of Utah later said it had introduced a new policy on blood samples barring officers from coming to the hospital in person to seek them.