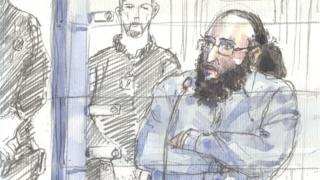 The brother of the French jihadist who murdered seven people in Toulouse, including three Jewish children, has been jailed for 20 years.

But he was cleared of having a direct role in the 2012 attacks, in which his younger sibling, Mohamed Merah, shot three soldiers and then three children and a teacher at a Jewish school.

Mohamed Merah, 23, was shot dead by police after a 32-hour siege in March 2012. His spate of deadly shootings, carried out in the name of al-Qaeda, was the first such jihadist attack in France since 1995.

The high-profile trial, which has been held amid tight security, began last month. Prosecutors had asked for life imprisonment for Abdelkader Merah and 20 years for Fettah Malki.

Abdelkader Merah, 35, had been accused of mentoring and encouraging his brother's interest in jihadism, and of helping him to steal a scooter that was used in the attack.

He denied the allegations, and his lawyers argued that he was being pursued by prosecutors because they could not put Mohammad Merah on trial.

Fettah Malki was jailed for providing Mohamed Merah with a weapon, ammunition and a bullet-proof vest.

Mohamed Merah shot and killed Imad Ibn-Ziaten, a 30-year-old staff sergeant in the 1st Airborne Transportation Regiment, behind the Chateau de l'Hers school in a quiet district of Toulouse on 11 March 2012.

On 19 March, Merah attacked the Ozar Hatorah Jewish school in Toulouse. He murdered Jonathan Sandler, a 30-year-old rabbi and teacher of religion, and his two sons Arieh and Gabriel, aged five and four.

The fourth victim was the head teacher's daughter, seven-year-old Myriam Monsonego, whom Merah grabbed by the hair and shot in the head.

Merah had filmed his murders with a head-mounted camera, which investigators later seized with the recording.

He was shot dead on 22 March after a police siege at his flat in Toulouse which lasted nearly a day and a half.