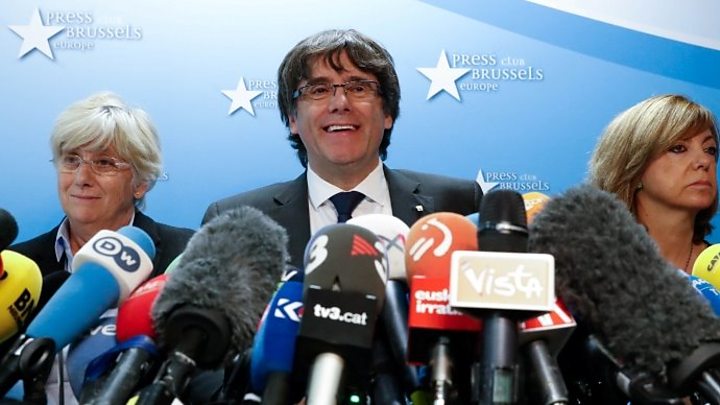 Sacked members of Catalonia's regional government have been ordered to appear in Spain's high court to face rebellion and sedition charges, after October's disputed independence referendum.

Madrid's court summoned 13 officials as well as former Catalan leader Carles Puigdemont, who has already said he will ignore the order.

"This is a political trial," said Mr Puigdemont, who is now in Belgium.

Prosecutors could order the officials' arrest if they fail to appear in court.

What is expected in the Madrid court?

On Monday, Spain's chief prosecutor said the Catalan leaders were accused of rebellion – which carries a maximum 30-year jail term – as well as sedition and misuse of funds.

They were ordered to appear in Madrid's Audiencia National (high court) on Thursday morning for questioning.

They are yet to be formally charged.

A judge will have to decide whether the officials should go to jail pending an investigation that could potentially lead to a trial.

It is unclear how many of those summoned will actually appear in court.

However, Mr Puigdemont earlier made it clear he would not be coming to Madrid.

"Those summonses are part of proceedings that lack any legal basis and only seek to punish ideas. This is a political trial," he said in a statement.

Mr Puigdemont previously said he would return to Spain if he and his colleagues received guarantees of a fair trial.

The Spanish government insists it has no influence over the country's judiciary, the BBC's Tom Burridge in Barcelona says.