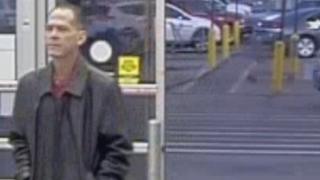 Three people have died after a shooting in a supermarket in suburban Colorado.

Two men died at the scene of the shooting and a wounded woman was taken to a hospital where she died.

Police say that the gunman "randomly" opened fire, before fleeing in a red four-door hatchback. He is still at large and police are trying to identify him with video footage.

The shooting occurred shortly after 18:00 local time on Wednesday (midnight GMT) in a suburban Walmart supermarket in Thornton, 10 miles (16km) north-east of the state capital of Denver.

Thornton Police Department spokesman Victor Aliva said there was no indication as to motive at this stage.

"We can't rule anything out," he said. "What we have determined is that it is random as of right now," Mr Aliva said, according to Reuters news agency.

Aaron Stephens, 44, of Thornton, said he was inside paying at a self-checkout till when he heard gunshots and the sound of ricocheting bullets.