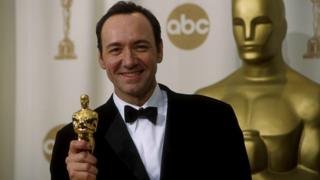 Kevin Spacey has said he is seeking treatment after facing allegations of sexual misconduct from a string of men.

A representative for the actor said he "is taking the time necessary to seek evaluation and treatment".

They did not give any information about what kind of treatment he wants.

He is one of several Hollywood figures who have been accused of sexual misconduct. Dustin Hoffman has issued an apology while director Brett Ratner has been accused by six women.

A lawyer for Ratner, the director of the Rush Hour films and X-Men: The Last Stand, has "categorically" denied all of the accusations.

Mr Montana told Radar Online that he was in his 30s when the incident took place at the Coronet Bar in LA.

Ratner says he has stepped away from dealings with movie studio Warner Bros since the allegations came to light.