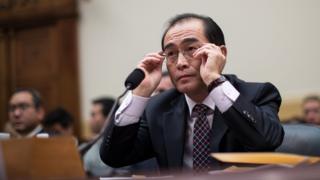 North Korea defector urges US to use soft power

A high-level defector has told the US Congress that spreading outside information in North Korea is the best way to deal with the regime.

Thae Yong-ho said undermining Kim Jong-un's God-like status among his people could be key to weakening his rule.

Mr Thae was deputy ambassador to the UK before he defected last year.

He is one of the highest-ranking officials ever to defect from North Korea.

Mr Thae's speech before US lawmakers comes as President Trump is due to embark on a trip to Asia, including South Korea.

Tensions between North Korea and the West have risen over the past months as Pyongyang has conducted several missile tests and claimed to have tested a hydrogen bomb.

In his first ever visit to Washington, Mr Thae told Congress: "We can educate (the) North Korean population to stand up by disseminating outside information."

He also urged officials to meet at least once with North Korean leader Kim Jong-un, to understand his thinking and convince him that his nuclear programme is risking mass destruction.

"It is necessary to reconsider whether we have tried all non-military options before we decide that military action against North Korea is all that is left," he said.

Changes in North Korea meant that "contrary to the official policy and wish of the regime, the free markets are flourishing", he said.

People were getting more access to outside information, including through micro SD cards which were small enough to be easily smuggled into the country, he added.

Young North Koreans have begun calling said devices "nose cards" because they can be smuggled even inside one's nostrils, he cited as an example.

These developments "make it increasingly possible to think about civilian uprising in North Korea as more and more people gradually become informed about the reality of their living conditions," he argued.

"The US is spending billions of dollars to cope with the military threat and yet how much does the US spend each year on information activities involving North Korea in a year? Unfortunately, it may be a tiny fraction," he said.

The rising tensions between Washington and Pyongyang have seen US President refer to Kim as "little rocket man," while the North Korean leader called Trump a "mentally deranged dotard".

North Korean defectors are one of the few sources of information about life in North Korea – yet critics caution that defector's testimonies might not always be credible, and that some defectors have changed their stories in the past.