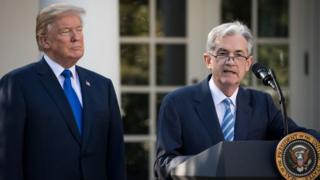 President Donald Trump has named Jerome Powell as his pick to lead the Federal Reserve.

Mr Powell, a Republican and multi-millionaire, currently serves as a member of the bank's board, to which he was appointed in 2012.

He had been widely tipped as the top choice for more than a week.

Analysts regard him as a status quo candidate, likely to continue the Fed's current policies of gradually raising interest rates.

"I am confident that Jay has the wisdom and leadership to guide our economy through any challenges," he said during the announcement in Washington.

Despite a tradition of reappointing Fed chairs, President Trump has said he wanted to make his own "mark".

On Thursday, President Trump thanked Ms Yellen for her stewardship of the bank, calling her a "wonderful woman who has done a terrific job".

Mr Powell, who has an estimated income of between $20m and $55m (£15m-£41m), is a lawyer by training and a former partner in the Carlyle Group, one of the world's biggest investment companies.

He was appointed to the Federal Reserve board in 2012 and has voted with the majority on issues such as interest rates.

In brief remarks on Thursday, Mr Powell said the economy has made progress since the financial crisis and pledged to make decisions "with objectivity, based on the best available evidence".

"Thank you again for this extraordinary opportunity to serve the American people," he said.

Reaction to the pick

The pick was no surprise on Wall Street and stock market reaction was muted.

John Silvia, chief economist for Wells Fargo, said the selection of Mr Powell was a bit of a "surprise", given the president's campaign criticism of the Fed's recent policies.

But it also reflected economic and political realities.

"It's an easy transition, both in terms of doing the policy but also in terms of getting approval in hearings in front of Congress," Mr Silvia said.

"Most people in the financial markets would feel a comfortable relationship with Governor Powell."

Representative Jeb Hensarling, a Republican from Texas, has pressed for increased congressional oversight of the Fed, as well as looser industry regulations.

In a statement, he said he had urged President Trump to pick a more hard-line candidate, but issued his congratulations.

He said: "If confirmed, it is my hope that [Mr Powell] will break from the past and lead the Federal Reserve to adopt a more transparent and more predictable monetary policy strategy and rationalise a regulatory agenda that has seen big banks become even bigger while community banks have become fewer."

Jay Powell is seen as the "status quo" candidate. When it comes to monetary policy, he doesn't appear to have deviated from the path set by the current Fed Chair Janet Yellen to raise rates at a slow and steady pace.

And the appeal of his appointment is easy to understand. After all, what's not to like about full employment and low inflation if you are a central banker or indeed the President. That means more people with jobs and more money in their pockets.

The question is how will he respond when unexpected events unfold? And let's face it, nasty surprises have a habit of creeping up. History teaches us that the next crisis will be different from past financial crises.

In such an instance, will being the continuity candidate be a hindrance or a help? Hopefully the latter given the importance of the role to the global economy.