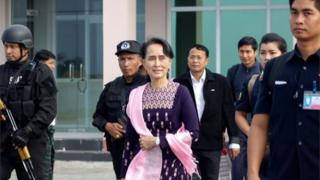 Her brief trip allowed her only short stops in areas affected by the military operation against Rohingya militants.

She has been criticised around the world for not stopping the military crackdown, amid allegations of ethnic cleansing.

Ms Suu Kyi visited the regional capital Sittwe and other towns during an unannounced one-day trip.

Most of the Rohingyas have now joined the massive exodus into Bangladesh, but Ms Suu Kyi did meet one of the remaining Muslim communities.

Her visit, accompanied by one of Myanmar's wealthiest businessmen, suggests the civilian government wants to be seen to be taking the lead now in dealing with Rakhine state, reports the BBC's Jonathan Head.

She argues the problems there can best be resolved through development and investment.

But she did not address the issue of the one million Rohingyas now living over the border. In the past she has said they will be allowed to come back – but fear of the Myanmar military and the widespread destruction of their homes and livelihoods make this an unappealing prospect without significant international aid and scrutiny, our correspondent says.

Rakhine Buddists, many of whom joined the attacks on the Rohingyas, have said they will not accept them back, even if the two governments manage to agree on a repatriation process.

The unrest in troubled Rakhine began after deadly attacks on police stations across the state, blamed on a newly emerged militant group, the Arakan Rohingya Salvation Army (Arsa).

Scores of people were killed in the ensuing military crackdown, and there are widespread allegations of villages being burned and Rohingya being driven out.

The military in Myanmar (also called Burma) says its operations are aimed at rooting out militants, and has repeatedly denied targeting civilians. Survivors, witnesses, refugees and journalists have contested this.

Where did Ms Suu Kyi go?

On Thursday, government spokesman Zaw Htay told AFP that Ms Suu Kyi was "now in Sittwe and will go to Maungdaw and Buthiduang too".

A Reuters reporter saw Ms Suu Kyi board a military helicopter in Sittwe on Thursday morning local time, the news agency reports. She was accompanied by about 20 people.

What has Ms Suu Kyi said about the Rohingya?

In a major speech in September, Ms Suu Kyi condemned rights abuses – but did not blame the army or address allegations of ethnic cleansing.

Ms Suu Kyi recently outlined a new plan to end the conflict and bring more development to Rakhine. She said this would be done by the civilian government, in partnership with local business groups and foreign donors.

However, international aid agencies are still not being allowed full access to the affected areas. And there has been no agreement yet with the Bangladesh government over how to repatriate the Rohingya refugees.

The Rohingya, a stateless mostly Muslim minority in Buddhist-majority Rakhine, have long experienced persecution in Myanmar, which says they are illegal immigrants.

In September, Bangladesh announced it would limit the movement of the Rohingya, saying they must stay in fixed places allocated to them by the government and not travel elsewhere.

Bangladesh also said shelters would be built for up to 400,000 people near the city of Cox's Bazar.

IcetruckNovember 2, 2017
Like story:
tweet
Why has the Bank of England raised rates?
Trove of ‘Russian troll’ posts exposed by Congress