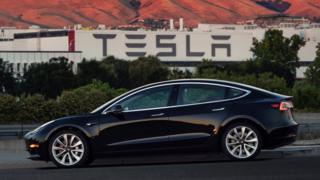 Electric carmaker Tesla pushed back targets for its new Model 3 car, admitting it's months behind schedule.

Tesla said it would now produce 5,000 of the cars each week by early 2018, instead of December.

The new target emerged as Tesla posted its biggest quarterly loss ever, sending its shares down more than 5% in after-hours trading.

Tesla made net losses of $619m (£468m) in the three months to 30 September, nearly double the previous quarter.

A year earlier, the firm made a profit of $21.9m. The losses were bigger than usual because Tesla has been focused on ramping up production of its Model 3 sedan.

The carmaker is hoping to attract mass market interest in the vehicle which is priced at $35,000, about half the cost of its Model S car.

Tesla said it had produced just 260 of the Model 3 cars in the third quarter, less than a fifth of the 1,500 vehicles it had planned to build.

In a statement the company said it continued "to make significant progress each week in fixing Model 3 bottlenecks".

"The nature of manufacturing challenges during a ramp such as this makes it difficult to predict exactly how long it will take for all bottlenecks to be cleared or when new ones will appear", it said.

Tesla said the main constraint was that progress had slowed at its Gigafactory in Nevada where its battery modules are assembled, and part of the production process has needed to be redesigned.

"I was really depressed about three or four weeks ago," chief executive Elon Musk said, adding that he is now optimistic because it is clear what changes need to be made.

But there could be further problems ahead.

While quarterly revenues rose about 30% from a year ago to nearly $3bn, Tesla continues to burn through cash.

The firm said it expected capital expenditures of $1bn in the fourth quarter, bringing its total investments for the second half of the year to $2bn.

And it could face heavy new demands for cash given the delays with the Model 3 and plans for new vehicles.