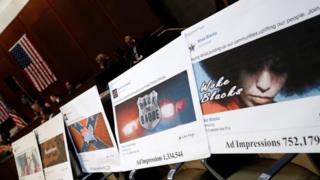 Further instances of social media posts and ads thought to be part of Russian propaganda efforts to influence the last US presidential election and divide its society have been shared with the public.

The US Senate Select Committee on Intelligence released the imagery following a hearing at which Facebook, Twitter and Instagram were criticised for having underestimated the problem.

The examples are a fraction of the number of posts that have been flagged as being suspicious by the tech companies themselves.

Other cases had been displayed on Capitol Hill earlier in the week.

In addition, the senators released data about how much had been spent promoting the material and how many people had been shown it. They have also provided a long list of Russia-linked Twitter accounts that have now been suspended.