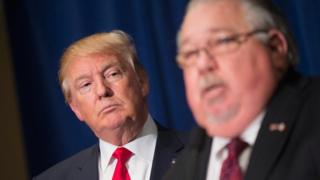 Trump aide Sam Clovis pulls out of consideration for job

An ex-Trump aide has withdrawn from consideration for an administration post amid scrutiny of his credentials and connection to the Russian inquiry.

Sam Clovis was a candidate to become chief scientist of the Department of Agriculture, but critics said he was devoid of experience for the job.

Mr Clovis has been linked to another former Trump adviser who lied to the FBI about his Russian interactions.

In a letter sent to the president, Mr Clovis – an early and vocal Trump supporter – wrote: "The political climate inside Washington has made it impossible for me to receive balanced and fair consideration for this position.

"The relentless assaults on you and your team seem to be a blood sport that only increases in intensity each day."

He had been due to face a congressional hearing next week on his appointment as undersecretary.

A Democrat said Mr Clovis' nomination was only withdrawn because he would have faced questions under oath about the Trump campaign's dealings with Russia.

Vermont Senator Patrick Leahy, a member of the chamber's agriculture committee, also said Mr Clovis was "a comically bad nominee, even for this administration".

Some 3,100 scientists signed a letter last month to the panel arguing that Mr Clovis was "completely devoid of relevant scientific experience".

The nominee conceded last month in a questionnaire from the committee that he had no background in hard sciences.

He is a former Trump campaign co-chairman and Iowa radio host with a background in political science.

But Mr Clovis told senators his career in Iowa politics had required some knowledge of agricultural science.

Mr Clovis has previously been criticised for rejecting the scientific consensus that human-made greenhouse gas emissions are causing climate change as "not proven", and for arguing that gay marriage could lead to the legalisation of paedophilia.

This week he cropped up in a criminal indictment against a former Trump campaign foreign policy adviser, George Papadopoulos.

Papadopoulos has pleaded guilty to lying to FBI investigators about his conversations with Russian nationals.

Mr Clovis' lawyer says his client is the "campaign supervisor" in the charge-sheet who encouraged Papadopoulos, a junior aide, to pursue back channel contacts with Kremlin-connected officials.

Meanwhile, former Trump campaign manager Paul Manafort and a business associate were back in court on Thursday.

They were charged this week with tax fraud by the Department of Justice investigation into alleged Russian meddling in the 2016 US elections.

Their charges do not state any direct connections to the Trump campaign or allegations of collusion.

The Kremlin has repeatedly denied interfering, while President Trump has depicted suggestions his associates co-operated with Russia as a witch hunt.