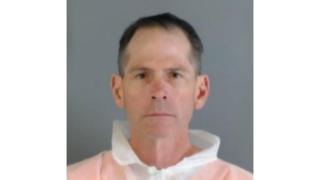 Police have arrested a man accused of shooting three people at a Walmart in suburban Colorado after a manhunt.

Two men died at the scene of the shooting and a wounded woman was taken to a hospital where she died.

Police said it took several hours to identify the gunman on CCTV, since several other armed citizens drew their weapons when the gunfire broke out.

'It's a crazy world'

Police say Mr Ostrem "randomly" opened fire, before fleeing in a red car. Investigators have not yet released a suspected motive.

The shooting occurred shortly after 18:00 local time on Wednesday (midnight GMT) in a suburban Walmart supermarket in Thornton, 10 miles (16km) north-east of the state capital of Denver.

The gunman was identified on Thursday morning as 47-year-old Scott Ostrem, who police say "did not have an extensive criminal history".

The police spokesman said there was no indication as to motive at this stage.

Police said the suspect was arrested after an anonymous tipster called police to report seeing his 2017 Mitsubishi Mirage near the suspect's apartment.

Swat officers detained him "without incident" after detonating a flash-bang explosive device to distract him as his car idled at a traffic light.

"He walked in very nonchalantly with his hands in the pockets, raised a weapon and began shooting," Mr Avila described.

"From what we have right now it appears to be random," he added. "It's a crazy world we live in."

Nearly 50 witnesses were transported by police vans to the Thornton Police Department headquarters where they were later reunited with family members.

Guadalupe Perez was with her son Erick, and first thought the gunshots were the sound of popping balloons.

"We were renting movies and we just heard this popping noise," she told CBS Denver. "The Walmart girl said: 'The balloons are popping.'"

"And I turn around, I just see all the people walking, falling down because they were really scared."

Aaron Stephens, 44, of Thornton, said he was inside paying at a self-checkout till when he heard gunshots and the sound of ricocheting bullets.

A spokesman for Walmart says that no employees were injured in the attack.

"The entire Walmart family is deeply saddened by this tragic event," the company said in a statement.

"Our thoughts, prayers and condolences go out to the families who lost loved ones and to all those who were impacted by what took place."

IcetruckNovember 2, 2017
Like story:
tweet
Pressure mounts on Apple to live up to hype for the iPhone X
IS ‘executed’ 741 civilians during Mosul battle – UN