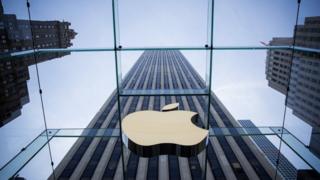 Apple shares have risen to a record high as the tech giant's iPhone X hit shelves around the world.

The launch coincided with strong results for Apple, with sales increasing by 12% to $52.6bn (£40bn) for the three months to September.

The tenth anniversary iPhone, which retails for £999, is Apple's most expensive handset yet.

The California-based firm, which also sells computers, iPads and makes revenue from apps, is now valued at nearly $900bn (£690bn).

With iPhone 8 and X handsets now on sale, Mr Cook predicted Apple's "biggest quarter ever" in the three months to the end of the year.

Shoppers queued up at Apple stores in dozens of countries, as the high-end iPhone X launched on Friday.

The iPhone X abandons the signature "home" button and can be unlocked with face-scanning technology, among other new features.

"A trillion-dollar market cap may now be in Cook's sights in light of these results and guidance around iPhone X," said Daniel Ives, an analyst at GBH Insights.

Mr Cook said the company was "firing on all cylinders", thanks to a sales rebound in China, record purchases through the App Store and robust demand for its latest iPhone models.

It sold more than 46.6 million phones in the July to September period, up 3% year-on-year. That produced $28.8bn, or more than half of its revenue.

Other products, including the Mac, iPad and Apple Watch, also did well, growing in the double digits.

The firm got another boost from its services division, which includes the App store, Apple Pay and its music subscriptions service.

That unit made $8.5bn in the quarter, up 34% year-on-year, thanks in part to a one-time adjustment.

Though its costs increased, Apple said profits were $10.7bn in the quarter, increasing 18%.

Apple said it expects to make between $84bn and $87bn in revenue in the upcoming quarter – a record for the company.

Mr Cook said the iPhone X positioned Apple ahead of the curve when it comes to new augmented reality or AR technologies.

He said the technologies were poised to "change everything". For example, he said, shoppers will be able to see how furniture looks in their living rooms before making a purchase.

"I view AR as profound, not today… but what it will be, what it can be," he said. "I think it's profound and I think Apple is in a really unique position to lead in this area."

IcetruckNovember 3, 2017
Like story:
tweet
Everything you need to know before seeing ‘Thor: Ragnarok’
12 Mistakes You Should Avoid In Order To Look Great In Photos