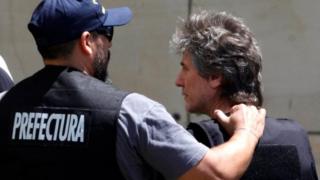 The Argentine police have arrested a second high-level official in the administration of former President Cristina Fernandez on suspicion of corruption.

Amado Boudou was her economy minister and vice-president and faces three charges of "illicit enrichment" dating back to 2009.

Amado Boudou has denied any wrong-doing.

The three charges against him refer to 2009, the year when he was promoted from heading Argentina's social security administration to become Mrs Fernandez's economy minister.

He became vice-president in 2011, when she was re-elected.

Mrs Fernandez herself is also facing corruption charges but has immunity from prosecution since being elected as a senator in the October polls.

She was indicted last year on charges that she and her public works secretary, Jose Lopez, embezzled money meant for road projects.

Mr Lopez was arrested last year after he was caught trying to hide bags of cash in a Catholic convent.