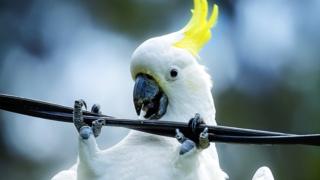 The birds have been gnawing through steel-braided cables on communication towers to wear down their constantly growing beaks.

NBN said replacing power and internet cables cost A$10,000 (£5,900) apiece, but internet service had not been disrupted by the birds' activity.

The company said it would protect cable ends to prevent further damage.

"That's Australia for you. If the spiders and snakes don't get you, the cockies will," said NBN's Chedryian Bresland.

The problem was discovered by engineers who found that spare cables left on communication towers for future upgrades had been damaged by the birds.

"They are constantly sharpening their beaks and as a result will attack and tear apart anything they come across. Unfortunately, they've developed a liking to our cables," said Mr Bresland in a blog post.

The company said it had discovered eight towers with cable damage costing A$80,000 to replace, but estimated that 200 cables were damaged in total.

Live cables providing internet access had not been damaged because they were protected by a plastic cage.

The company said it would begin capping the end of spare cables with a canister costing A$14 to prevent future damage.