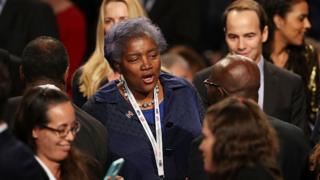 The Democratic Party's ex-interim chief has accused Hillary Clinton of seizing control of the party in exchange for funding during the 2016 campaign.

Donna Brazile alleges in her new book that the Democratic National Committee (DNC) signed a deal with Clinton's team to keep the party financially afloat.

In exchange, the Clinton campaign would control the DNC's "finances, strategy and all the money raised", she said.

She claimed the deal showed favouritism toward Mrs Clinton over Bernie Sanders.

The DNC was meant to be neutral in the contest between Mrs Clinton and her Democratic primary season challenger, Mr Sanders.

Supporters of Mr Sanders have long insisted that the DNC was biased against him.

But Mr Sanders' 2016 campaign also signed its own joint fundraising agreement with the DNC.

In excerpts from Hacks: The Inside Story of the Break-ins and Breakdowns that Put Donald Trump in the White House, published by Politico magazine, Ms Brazile wrote that Mrs Clinton's "campaign had the DNC on life support, giving it money every month to meet its basic expenses".

"The funding arrangement was not illegal but it sure looked unethical," she added.

"This was not a criminal act, but as I saw it, it compromised the party's integrity."

Ms Brazile came under fire last year after the anti-secrecy website released hacked DNC emails that revealed she had notified the Clinton campaign in advance of a question she would be asked at a town hall-style event hosted by CNN.

Hillary Clinton's presidential campaign, she says, had effective control over the DNC before any ballots were cast in the 2016 Democratic presidential primaries. Starting in August 2015, the Clinton team controlled the committee's "finances, strategy and all the money raised".

It had say over staff hiring and veto power over press releases and mailings.

This is not, as some have argued, proof that the primary process was "rigged" against the Vermont senator, who finished a surprisingly strong second to (but still millions of votes behind) Hillary Clinton when the primaries had concluded.

Ms Brazile searched, but could find no evidence of tampering, of tilting or of twisting. But it's also clear, if the long-time Democratic operative is to be believed, that the Democratic committee was tied at the hip to the Clinton forces – a set-up that occupies ethically questionable ground.

A reckoning is coming, and the blame does not rest solely at Mrs Clinton's feet either.

Over the course of his presidency, he has been accused of neglecting the party's infrastructure, allowing atrophy at the state and local level, and leading to massive down-ballot defeats during mid-term on his watch.

As the top Democratic officeholder, it was the president's responsibility to ensure Democratic vitality – and the record, at the ballot box and in party coffers, paints a dismal picture.

Ms Brazile also has her own reputation to mend, as Russia-sponsored DNC email hacks showed she once shared Democratic town hall questions with Clinton staff in advance.

Her disclosures may be as much about rehabilitating her reputation as they are about exposing misdeeds or selling books.

These revelations will only exacerbate the fault lines that have formed within the Democratic Party between more moderate officeholders and the populist, pro-Bernie legions. It goes without saying, as well, that Donald Trump will at some point latch onto the story and do his best to sow discord in the ranks of his opponents.

As the midterm elections loom just a year away, Democrats need to present a united front if they want to rebound from 2016 disappointment and capitalise on poll numbers that show widespread dissatisfaction with the Trump presidency.

On Thursday they took a big step backward.

US President Donald Trump weighed in on Ms Brazile's accusations late on Thursday, saying in a tweet she had "stated the DNC RIGGED the system" to tip the Democratic nomination in Mrs Clinton's favour.

Donna Brazile just stated the DNC RIGGED the system to illegally steal the Primary from Bernie Sanders. Bought and paid for by Crooked H….

….This is real collusion and dishonesty. Major violation of Campaign Finance Laws and Money Laundering – where is our Justice Department?