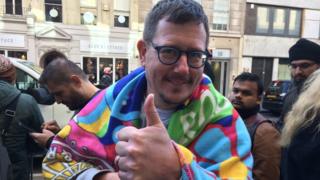 iPhone X: Why did people queue up overnight?

The new £999 iPhone X has hit shelves in more than 50 countries – but what drove fans to line up in the middle of the night for it?

The queue was already 100-strong when Nick Davies arrived at Apple's flagship UK store at 02:30.

It wasn't the painfully early start or the night-time cold that people minded. It was the lack of portaloos.

"Everyone is desperately looking for a toilet at 4 or 5 o'clock," he says.

There were queues outside Apple stores the world over in the early hours of Friday for the launch of the tenth anniversary iPhone.

Apple is predicting that big demand for its most expensive phone to date will help revenue hit a new record high.

If it is a big hit, the US tech firm could even become a trillion dollar company, according to some analysts.

There is always fanfare for a new Apple phone – but Brady Daniels, who joined the queue at 06:00 in London, says the "hype is high" for this one.

It's largely because of the edge-to-edge screen – with no "home" button – and the Face ID, which unlocks the phone with a selfie, he says.

"People have been pretty excited. Now people are getting cold and a little grouchy because the line is moving slower than expected, but people are pretty happy," he says.

The phones were available to order in the UK from 27 October – but plenty missed out, and so queued up on Friday to be among the first to get their hands on one.

The queue for the Regent Street store in London was still stretched round the corner and down the road just after 10:00 when the shop opened.

But not everyone was happy with the launch.

The problem, for Nick at least, was that the store quickly ran out of the version of the phone with more memory – the iPhone X 256GB.

"It's difficult because you're loyal to the brand but the launches are pretty bad.

"This is their loyal customer base. It's just nice if Apple would show a little bit of loyalty to them," he says.

Others came up with intrepid, time-saving ways of getting the phone.

"I've always been a little bit of an Apple geek," Aaron says.

He failed to reserve one, but rather than wait for a month he thought he'd try to get it from the shop.

Apple chief executive Tim Cook is predicting the iPhone X will help the company record its "biggest quarter ever" in the three months to the end of the year.

His guidance – and strong sales of other products – led Daniel Ives, an analyst at GBH Insights, to say "a trillion-dollar market cap may now be in Cook's sights".

There won't be many in the iPhone X queues who would disagree with that.