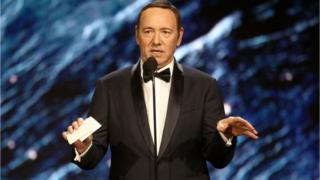 Kevin Spacey is being investigated by UK police over an alleged sexual assault, according to reports.

The Sun said a man, aged 23 at the time, made a complaint on Tuesday about the alleged incident in the London borough of Lambeth.

The Met confirmed that they are investigating an alleged assault on a man from 2008.

They would not confirm the allegation was made against House of Cards actor Spacey.

Spacey said on 2 November he is seeking treatment after facing allegations of sexual misconduct from a string of men.

The Sun reported that a British actor claimed he woke up to find Spacey performing a sex act on him in 2008.

The man is said to have run from the property after Spacey allegedly said: "Don't tell anyone about this."

A spokesman for the Met said it had no record of any arrests having been made in connection with the investigation and police declined to comment on The Sun's report, which says the complainant had been interviewed by police.

It comes after a number of allegations, including by Star Trek actor Anthony Rapp, who claims Spacey tried to "seduce" him when he was 14.

Spacey said he was "beyond horrified" to hear of the incident, which he does not remember.

IcetruckNovember 3, 2017
Like story:
tweet
14 Facts About Your Favorite Films That Will Confuse You
There Are Just 5 Types of Personalities in The Whole World, Find Which One Are You!