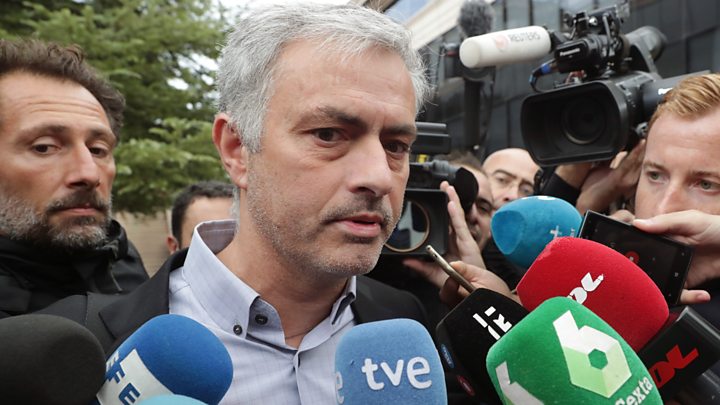 Manchester United manager Jose Mourinho has said a Spanish tax fraud case relating to his time in charge of Real Madrid is closed.

He emerged after a brief hearing at a court in the Spanish capital Madrid to say he had paid a fee to settle accusations.

The hearing came two days before a Manchester United game against Chelsea.

The Spanish authorities began the image rights case against Mr Mourinho in June.

"I left Spain in 2013 with the information and the conviction that my tax situation was perfectly legal," Mr Mourinho said after Friday's hearing.

"A couple of years later I was informed that an investigation had been opened and I was told that in order to regularise my situation I had to pay X amount of money.

"I did not answer, I did not argue. I paid and signed with the state that I am in compliance and the case is closed."

Mr Mourinho's representatives, Gestifute Media, said earlier that he had paid more than €26m in tax at an average rate of more than 41% while living in Spain from June 2010 until May 2013.

In 2015, Gestifute said, he accepted a settlement agreement regarding previous years.

Argentines Lionel Messi, Javier Mascherano and Angel Di Maria have all been punished for tax evasion while a case against Real Madrid star Cristiano Ronaldo continues. He denies wrongdoing.