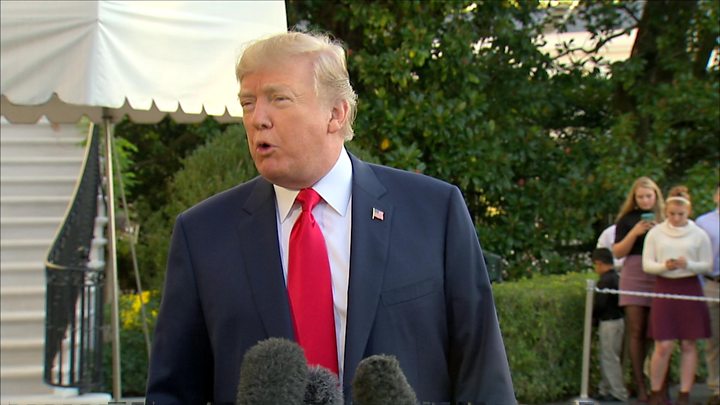 President Donald Trump has said the US is hitting so-called Islamic State "10 times harder" in retaliation for the New York truck attack on Halloween.

"Every time they hit us, we know it's Isis, we hit them like you folks won't believe," Mr Trump told reporters at the White House.

US military figures appear to show no major change in strikes against the militants' strongholds.

The so-called Islamic State has claimed credit for the Manhattan rampage.

"What we're doing is every time we are attacked from this point forward, and it took place yesterday, we are hitting them 10 times harder," Mr Trump told reporters on Friday before departing on a 12-day tour of five different Asian nations.

"So when we have an animal do an attack like he did the other day, on the west side of Manhattan, we are hitting them 10 times harder."

On Friday, the Pentagon announced that it had carried out two airstrikes against IS militants in northeastern Somalia, "killing several terrorists".

A statement from US Africa Command did not mention if the strikes were related to the New York attack, which was allegedly carried out by an Uzbek immigrant.

What does the US military say?

Mr Trump's claim was difficult to immediately verify, but daily strike figures released by US Central Command – which oversees the mission against IS in Syria and Iraq – showed no significant change since the attack on 31 October.

According to Central Command, 13 strikes were launched against IS on 31 October, the same number launched on Thursday – two days after the attack.

However, the figures provided by Central Command fail to show the amount or intensity of the bombs used, or how those weapons were launched.

IS has steadily lost territory in Iraq an Syria in recent months.

According to Syrian state TV, IS recently lost its last major stronghold of Deir al-Zour, a city on the Iraqi border it had mostly held since 2014.