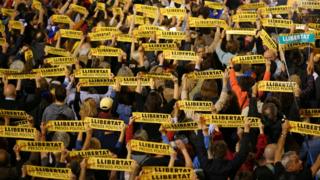 Catalan ex-leader Carles Puigdemont has called for separatist parties to unite in upcoming regional elections to continue a push for independence.

The snap poll was called by Spain after the Catalan parliament declared independence and Madrid reacted by imposing direct rule.

Mr Puigdemont's appeal came a day after a Spanish judge issued an EU warrant for his arrest – he is in Belgium.

Despite being sought by the courts, he says he is ready to run in the poll.

Four of his allies in Belgium also face possible extradition, while eight other former officials remain in custody in Spain.

They all face charges of rebellion, sedition and misuse of public funds for pursuing Catalan independence. There have been large demonstrations in Catalan cities in protest.

Mr Puigdemont has said he will not return to Spain unless he receives guarantees of a fair trial.

He says he can campaign in the December 21 election from outside Catalonia and the Spanish government has said that any accused politician can run in the election unless they are actually convicted, the Associated Press reports.

In a tweet on Saturday, he said it was time "for all democrats to unite. For Catalonia, for the freedom of political prisoners and for the republic."

He included a link to an online petition calling for secessionist parties to unite against Madrid in the regional vote. The petition now has more than 39,000 signatures.

Belgian authorities, meanwhile, are reviewing the arrest warrants issued by the Spanish judge.

The process could take up to three months "under exceptional circumstances", the justice ministry said.

The other warrants are for:

Five senior members of the Catalan parliament, as well as Speaker Carme Forcadell, are facing the same charges but, because of their parliamentary immunity, their cases are being handled by the Supreme Court. Their hearings have been postponed until 9 November.

The regional parliament in Catalonia voted to proclaim an independent republic just over a week ago, following an illegal referendum on independence organised by the Catalan government on 1 October

No other country recognised the move and the Spanish central government moved swiftly to impose control, using emergency powers under the constitution.

IcetruckNovember 4, 2017
Like story:
tweet
Belgium hopes to act on warrant for hiding Catalan leader
Russia’s hackers took only a week to pry into Clinton camp