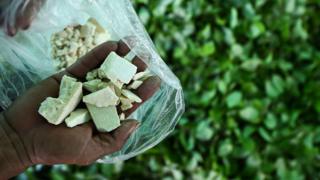 Colombia has signed a $300m (£230m) agreement with the United Nations aimed at reducing the production of cocaine.

Farmers who switch from growing coca – the raw material used to make cocaine – to safer crops will be compensated.

The head of the UN's Office on Drugs and Crime (UNODC) said it was an "opportunity to turn the tide against Colombia's coca cultivation".

Colombia is ranked as one of the main drug-growing nations in the world by the UNODC.

Speaking in Vienna, the head of the UNODC, Yury Fedotov, said: "This historic agreement is a unique opportunity to turn the tide against Colombia's coca cultivation and help farmers embrace alternative development.

"The pursuit of peace requires tangible solutions to the crimes that fuel and feed conflict."

Currently, farmers earn $300 (£230) a month for every hectare of coca they grow. This initiative will provide compensation to farmers if they revert to producing safer crops, such as coffee and cacao.

But the Colombian government says it is being challenged by armed groups who are trying to take over traditional coca production areas.

These areas have expanded hugely in recent years. In July, the UN said there had been an annual increase of 50% in the area of land being used to cultivate coca leaf in Colombia.

Local analysts say the rise was caused partly by the government's peace deal with Farc rebels. Under the deal, the Farc agreed to relinquish control over drug production areas and help the government try to encourage local farmers to plant substitute crops.

But farmers took advantage of the delays while the crop substitution policy was set up. They planted coca because they knew they would be offered subsidies later not to grow the plant.