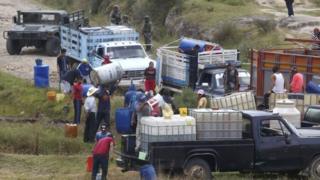 A gang leader in Mexico has been killed while undergoing plastic surgery to disguise his identity by changing his face and erasing his fingerprints.

Officials said gunmen burst into the clinic in the city of Puebla and killed Jesus Martin, known as El Kalimba, while he was on the operating table.

Police said the murder seemed to result from a dispute between rival gangs.

They said Martin had been running an operation illegally siphoning fuel from pipelines.

Jesus Martin wasn't the first crime boss in Mexico to use plastic surgery to avoid death or arrest.

The notorious Joaquim Guzmán, known as El Chapo, was captured in 2014 despite changing the shape of most of his features while on the run.

Jesus Martin was known as a "Huachicolero" or a "chupaducto" (pipesucker). He had been running an operation that illegally tapped pipelines, stealing fuel for cheap resale.

The "Huachicoleros" siphon off the fuel and then sell it on at half the market price on busy highroads, costing Mexico's oil company millions of dollars in lost revenue.

Thousands of families are now engaged in this illegal activity.

The new business has inspired its own subculture and saint, "The Infant Huachicolero", to whom locals pray and make offerings in the hope of receiving protection and prosperity.

It mostly takes place in an area of central Puebla state where pipelines carry 40% of the country's fuel and has begun to have a significant economic impact for Mexico's oil company, Pemex, and local governments.

In April, the Mexican Congress approved a bill to increase sentences for fuel stealing to up to 25 years in prison.