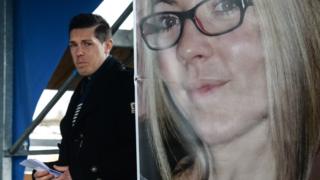 Family and friends have joined a march of some 10,000 people through a French town in response to the murder of a local woman who vanished last weekend.

The burnt body of Alexia Daval, 29, who disappeared while jogging, was found in woodland near Gray, a town in the north-eastern region of Haute-Saone.

An autopsy has found she was strangled. No arrests have been made and her attacker's identity remains unknown.

Women have honoured her with symbolic runs in cities across France.

In Gray, a quiet town of 5,000 residents, people marched in silence on Sunday and listened to speeches by her grieving husband Jonathan Daval and other family members.

Mrs Daval, a bank worker, went out for a run on Saturday 28 October. After not hearing from her for several hours, her husband called the police.

Her body was eventually found covered in foliage in a wood far from her normal jogging route.

A source close to the investigation told AFP news agency there were no preliminary indications she had been raped.

Addressing the rally in Gray, Mrs Daval's mother, Isabelle Fouillot, paid tribute to the women and men who had gone out running to commemorate her daughter and other victims of violence against women.

"With these sporting gestures, you are making Alexia into a strong symbol, one of the freedom for all women to enjoy running and to live," she said through her tears.

IcetruckNovember 5, 2017
Like story:
tweet
Ryan says health insurance mandate part of GOP tax talks
The 16 Restaurants Have The Most Antibiotics In Their Meat! Avoid Them!