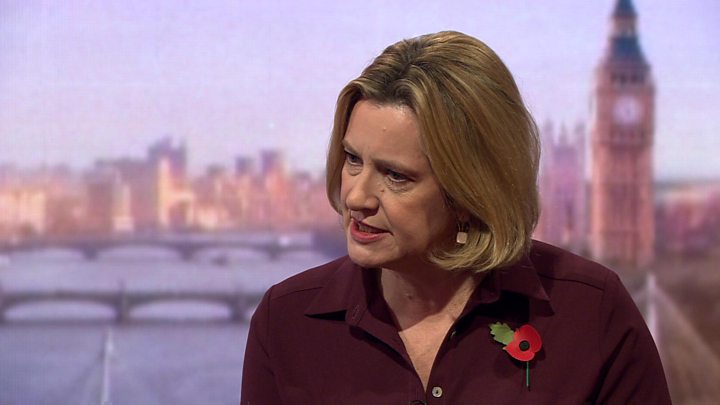 Ms Rudd said internet giants have a "moral duty" to act and need to work with smaller platforms used by child gamers where paedophiles operate.

She is to meet counterparts in the US government to discuss the issue.

The tech companies have said they are doing their utmost to keep their young users safe.

During Ms Rudd's trip she will attend a roundtable discussion joined by tech companies including Google, Facebook and Microsoft.

The home secretary will welcome work that has been done to tackle online child sexual abuse, but will also say that more needs to be done at a "far greater pace" across the technology industry.

Speaking to the BBC's Andrew Marr on Sunday, Ms Rudd said: "We've seen the real growth of child sexual exploitation internationally, and we're going to make sure that we work with the Americans to take action against it.

"We need to make sure [tech companies] put their technical know how into addressing it.

"Particularly working with smaller platforms where children go to game online, to meet each other; there are paedophiles working there.

"We need to make sure that internet companies work with us, in partnership, to change this."

Ms Rudd's comments come as new government figures show there was a 700% increase in the number of indecent images identified on technology company servers and flagged to law enforcement agencies between 2013 and 2017.

Each month there are more than 400 arrests for indecent images of children offences in the UK and some 500 children are being protected from online sexual exploitation, the government said.

Ms Rudd will also raise concerns about the use of messaging websites and apps, as well as video and image apps and websites, during her trip.