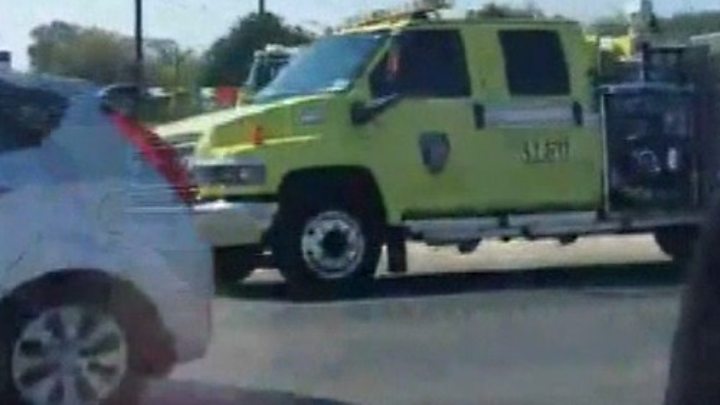 More than 20 people have been killed after a gunman opened fire at a church during Sunday services, police say.

The attack happened at the First Baptist Church in Sutherland Springs, a small town in Wilson County, Texas.

Wilson County Commissioner Albert Gamez Jr said the gunman fled the scene in a vehicle before being killed.

"You never expect something like this. My heart is broken," Mr Gamez Jr said.

Earlier estimates put the death toll as high as 27. Mr Gamez Jr told CNN he was told by an emergency medical technician at least 27 died and 24 others were wounded.

About 50 people usually attend the service, locals said. The BBC's James Cook reported that children were among those killed.

The First Baptist Church's pastor, Frank Pomeroy, has told ABC News that his 14-year-old daughter, Annabelle, was killed in the shooting.

Mr Pomeroy, who was out of town in Oklahoma at the time, described her as "one very beautiful, special child" in a phone call to the television outlet.

The gunman died after a brief car chase into nearby Guadalupe County slightly to the north, a Sherriff's Office deputy from that county told CNN.

But it is not clear if he was killed by police or killed himself, the spokesman said.

One witness, Carrie Matula, told NBC News: "We heard semi-automatic gunfire… we're only about 50 yards away from this church."

The pastor and his wife were out of town at the time, the pastor of neighbouring River Oak Church told KSAT 12.

"We were in the middle of our church service down the road when we got phone calls from friends about this – and they said there was an active shooter at First Baptist Church," he said.

"We had some first responders in our church, who immediately left and went down there. And then my church went to do what we do – we started praying… we knew the best thing we could do was stay out of the way".

He said people had been told some news which was "private and personal for the families that are here… we cannot release any of that".

Sutherland Springs is a small rural community with just a few hundred residents, which lies about 30 miles (50km) southeast of the Texas city of San Antonio.

Photos and video from the scene showed the area taped off by local law enforcement.

Texas governor Greg Abbott said: "Our prayers are with all who were harmed by this evil act. Our thanks to law enforcement for their response."

He said more details would be released by the Texas Department of Public Safety shortly.

President Donald Trump, on a tour of Asia, tweeted he was "monitoring the situation from Japan".

May God be w/ the people of Sutherland Springs, Texas. The FBI & law enforcement are on the scene. I am monitoring the situation from Japan.

Texas Attorney General Ken Paxton said in a statement: "The thoughts and prayers of all Texans are with the people of Sutherland Springs as tragic reports come out of First Baptist Church. My office stand ready to assist local law enforcement as need".