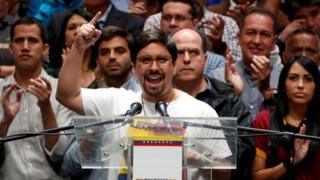 A prominent Venezuelan opposition politician has taken refuge in the Chilean ambassador's residence in Caracas, after the Supreme Court stripped him of his immunity from prosecution on Friday.

Freddy Guevara is accused of instigating violence during opposition protests.

The opposition say Mr Guevara is the victim of political persecution.

Mr Guevara, 31, is the vice-president of Venezuela's National Assembly.

Chile's foreign ministry said he had asked for protection from what he considered to be imminent threats to his security and added he was being treated as a guest.

"Some people are brave when it comes to inciting violence, destruction and death," Mr Arreaza wrote on Twitter.

"But when justice is done, they run away in shameful cowardice."

The opposition said his house was surrounded by agents from Venezuela's secret service, Sebin, over the weekend.

The National Assembly's president, Julio Borges, said the government of President Nicolas Maduro was behind the court's ruling.

"This is an arbitrary and political decision that seeks to weaken a congress that has the full support of the people," he said.

Several key figures in the Venezuelan opposition have been prosecuted, jailed or stripped of their political rights since Mr Maduro was elected to replace the late Hugo Chavez in 2013.

Opposition leaders say he has tightened his grip to power since he convened a constituent assembly earlier this year, which in effect replaces the National Assembly.

The opposition boycotted the vote to establish the new assembly.

Mr Maduro's term ends in 2019 and elections are expected to take place some time next year.

He has accused the opposition of inciting violence and colluding with foreign powers to destabilise his government and undermine the programme of social reforms initiated by Mr Chavez in 1999.

IcetruckNovember 5, 2017
Like story:
tweet
Inside Patton Oswalt and Meredith Salenger’s wedding
5 Positive Things That Immediately Happen When You Distance Yourself From Negativity